We have just arrived at Faro Island from the Faro theatre parking where we spent 3 nights. A few vans here but many more across the causeway at the Airport squat. Weather a bit cloudy and windy today but warm still. Great surf and lots of folk in the sea enyoying it. We were here. 4 years ago and the little shacks that were peoples homes in the sand dunes were being knocked down as they were illegal it seemed. But wandering around today we found that lots had survived and were still being lived in, a new board walk has been installed through the surviving shacks and the whole area now looks great and secure, great news as I would hate to have seen their total demise as it is Portuguese heritage and fishermen's homes, so good news there. New toilet and showers replace the old in the car parking and a relocated cassette emptying facility still all free so another good result for us vanners.

Somewhere i have never been,why are them folks praying at what looks like a shower unit.

The week before Christmas a lot of sand was washed up from the beach and accross this area, obviously quite unusual. No worry for anyone staying there as the water ran under the vans and away.

Well one is a Motorhomer getting water from what is actually a foot wash facility for washing sand off of ones feet after leaving the sandy beach, potable mains water by the way, the other man is a local Portuguese man washing cockles he has gleand from the beach, it all happens here hee hee.

One is getting potable water from the foot wash tap, the other is washing his cockles hee hee which he has collected from the beach, it all happens here. There are foot wash outlets here and cold showers above 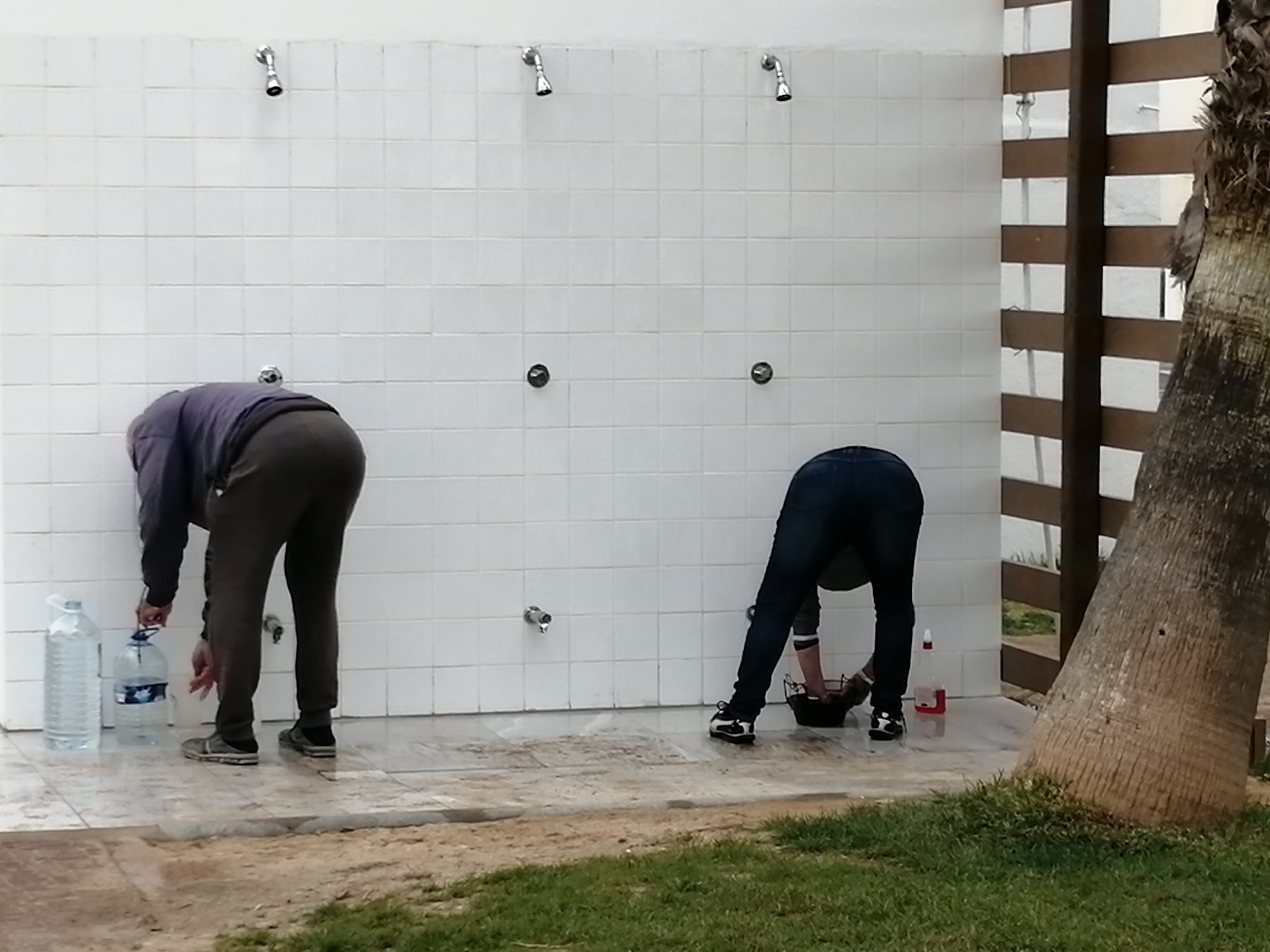 Maybe it's a power shower trev.

If your on the island looking out to sea turn right and go to the very end of the road to a cafe called Ze Zea run by a funny man called Craig, best coffee in a mug €1.20. He likes the Faulty Towers comedy, he is Portuguese but his English is Etonian good food as well.

They have also closed down the campsite on the island and are presently bulldozing it to rebuild. They had a problem getting some long term campers off, they had been there 30 years. They fought it but lost using the 3.5 ton bridge limit in their appeal. So I suppose it wasn’t that limit originally and their vehicles where to heavy to leave. Funny how they did go anyway

The day we left the Island Faro I went to the facility to get water but found that one of the lower taps had been removed or broken off, and the whole block then had no water as it had been turned off. There was a large party of school kids playing around the toilet block previously so maybe one of them had stood on the tap and it broke off accidently, Whatever had happened there was no longer water to be had, we left that day so do not know if it had been reinstated or not, you could still use the toilet dump drain however.

Weather here in Palmera Castle is cloudy, spits of rain, but food in the restaurant is very nice.

all lower taps have been removed and blanked off ?

Oh no when they where working last week we used them ? And emptied loo ?

presumably done by local authorities to move campers on. it's worked only 3 or 4 left around rather than 10 or 12.
it's not an aire never has been
You must log in or register to reply here.