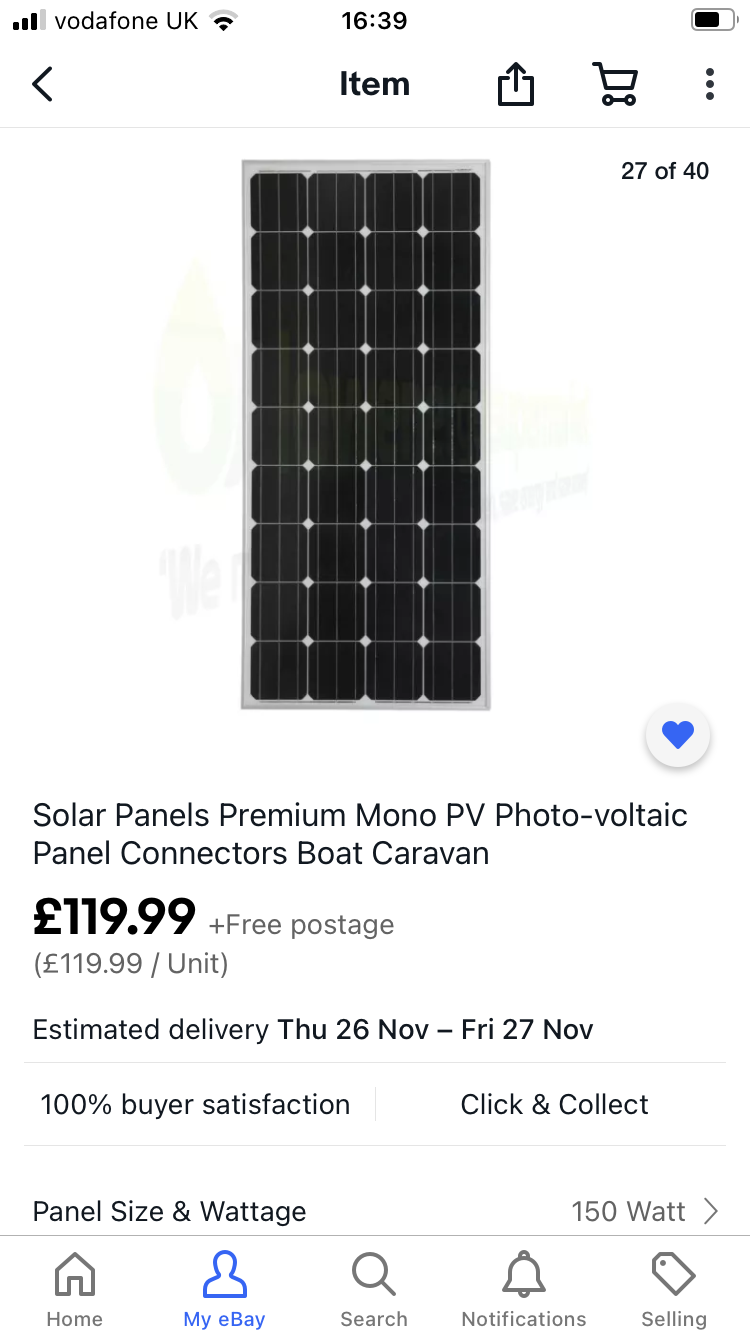 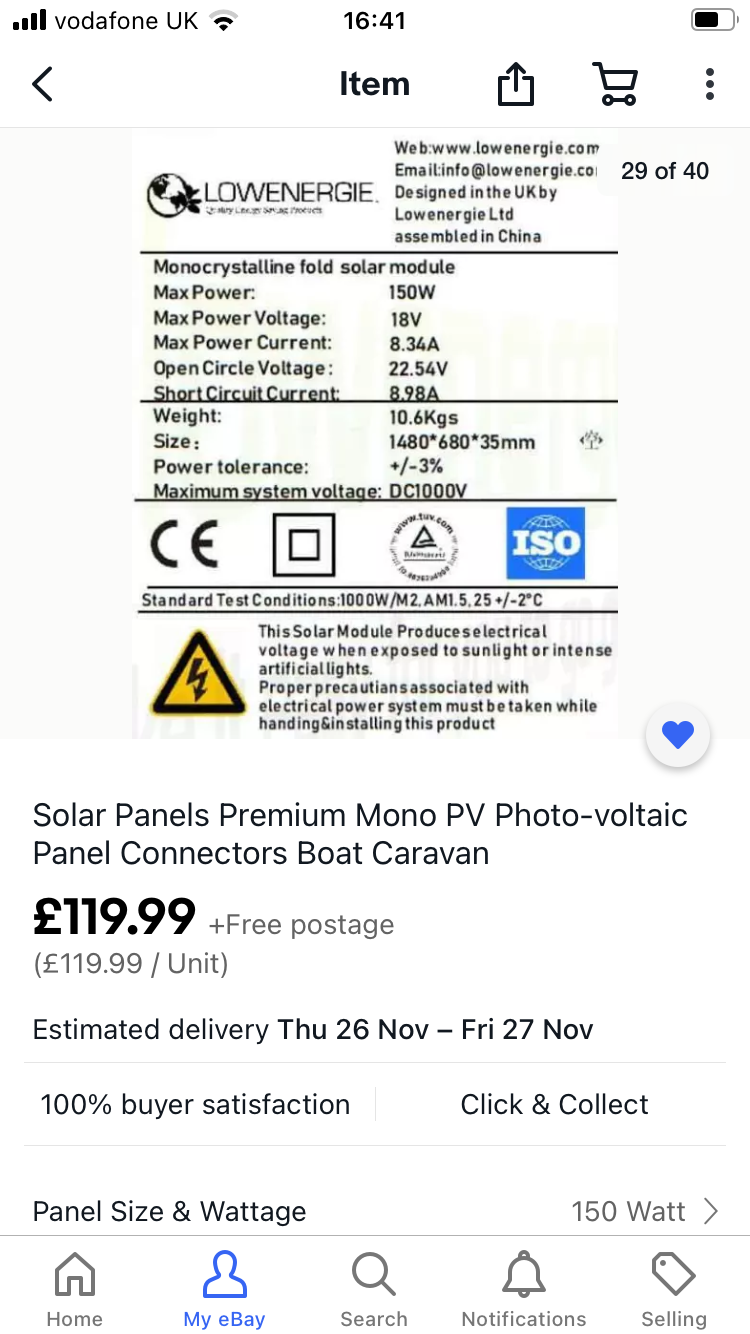 What is the max power voltage and max power current of the panel you have now?

Hi. Are now there lies an interesting question. Quick answer Erm. Errr. Hmmmmm. I don’t know. When I got the van I was told it had a 150w solar panel. So. That’s what I was going by. So Phillip. How do I find out. Please. Easy now. I am not the brightest on subjects electrical solar or other. Brian

Hi. Ok. Ladder. Camera .action. Hey it’s dark outside. I will do it in the morning Not that I’m scared of the dark. Honest. Well. Maybe. Ooh all right. Will do in the morning. Thank you Phillip. Brian

and take a measurement - Length and Width. Can get a good idea from the physical size.

You also need to have the battery capacity to store the extra harvested energy.
If you have 150W solar and 100Ah battery and add 300W solar, you'll have 450W solar charging 100Ah.
So you'd need to balance harvesting with storage to make it worthwhile.

Yes more batteries for sure, at least 300amp hour, I run 200w solar and 180ah batts and find in high sun I could easy do with more storage as in extra battery.

trevskoda said:
Yes more batteries for sure, at least 300amp hour, I run 200w solar and 180ah batts and find in high sun I could easy do with more storage as in extra battery.
Click to expand...

Just sell the surplus to the grid!

Wildbus is really the man to talk to as its his thing and has helped me with his posts regarding mppt regulators etc.

brian c said:
Hi. Ok. Ladder. Camera .action. Hey it’s dark outside. I will do it in the morning Not that I’m scared of the dark. Honest. Well. Maybe. Ooh all right. Will do in the morning. Thank you Phillip. Brian
Click to expand...

What’s wrong with using flash on your phone scaredy-cat? I’ve got some 250w panels if I can be of any help?

Something that may be of interest depending on the SHAPE of the space you have available on the roof.... Victron panels often have different proportions to most other panels on the market and could suit some requirements better.
For example, you typically tend to see panels that are twice as long as they are wide. Many Victron panels are much closer to square in shape (I went for Victron panels for my forthcoming installation for this specific reason)

If the info panel is not readable,, another method (although sounds frightening) is to measure the open circuit voltage at the leads, then short them together and measure the current flowing. Clip on type meter ideal. both done in strong sunlight if any available at this time of year.

Hi. Ok. Photos show solar controller,,,,,, and two X. 100ah batterys. 3 months old. ( thank you alpha batts. Thank you wild camping discount ) Tried to get photo of under solar panel. No joy. Can't find label. Can't get camera underneath. So. Measurements are. 26. Ins. X 50. Ins. After reading previous answers. Am now slightly worried re to much solar. We have no intention off ever going abroad(. Except 5 days October to Germany. Every year ) most of our mohoing is done end sept to April. In U.K. The more isolated the place the better. If we never see another person/ vehicle Then even better. We only visit civilisation to shop. Some people say antisocial. Each to there own. I digress. On the roof I have room to fit two more panels up to 26x50ins each. So I thought winter. Early nights. More solar/ power When I have sorted out more of what I need then hi. David. . For the controllers victron/ ablemail. Etc. Plus to arrange fitting. Just at the moment trying to find recommendations of what I need and. When finances smile, slowly get some bits ,hope this helps. Thanks in advance. Brian. 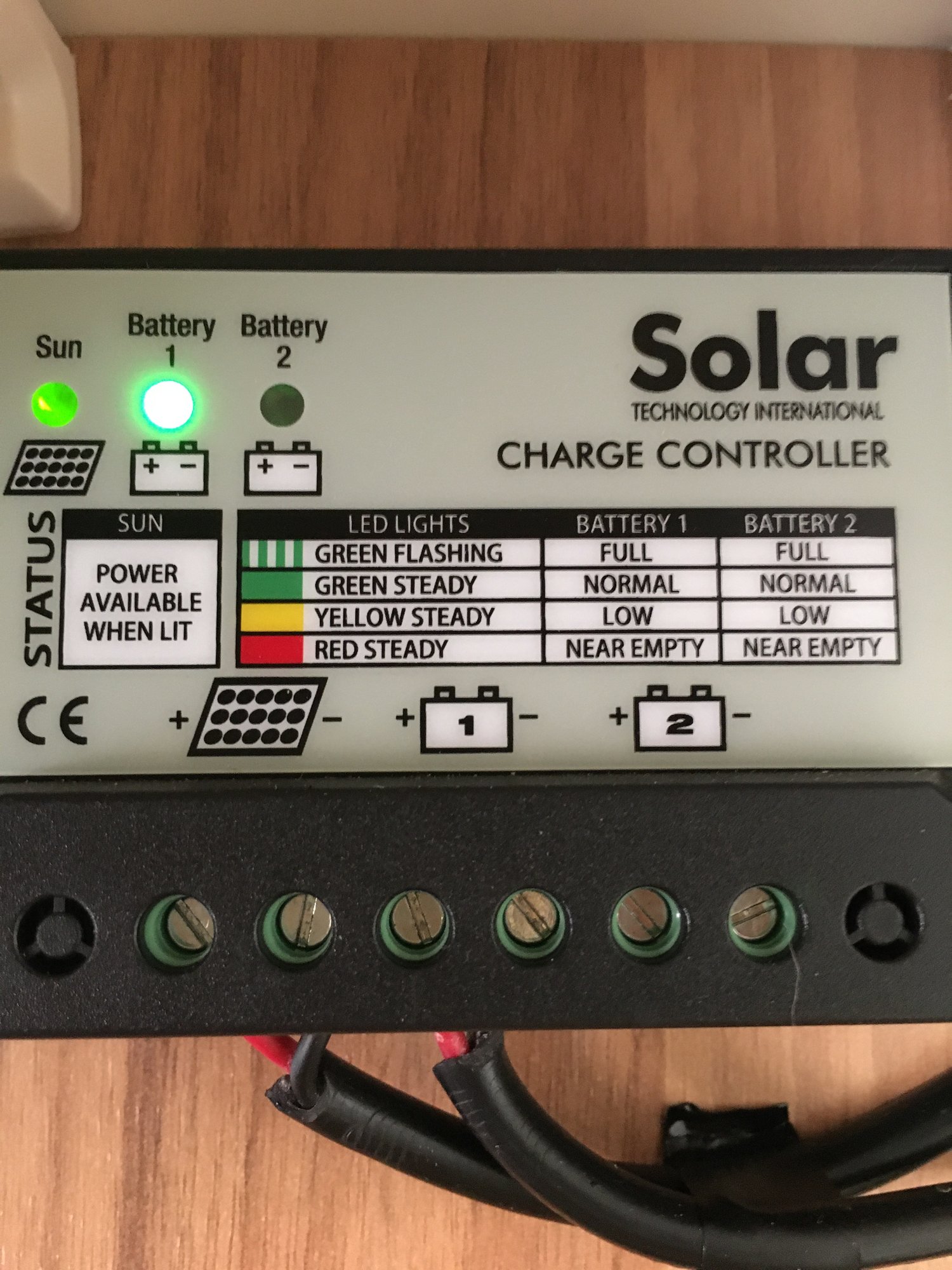 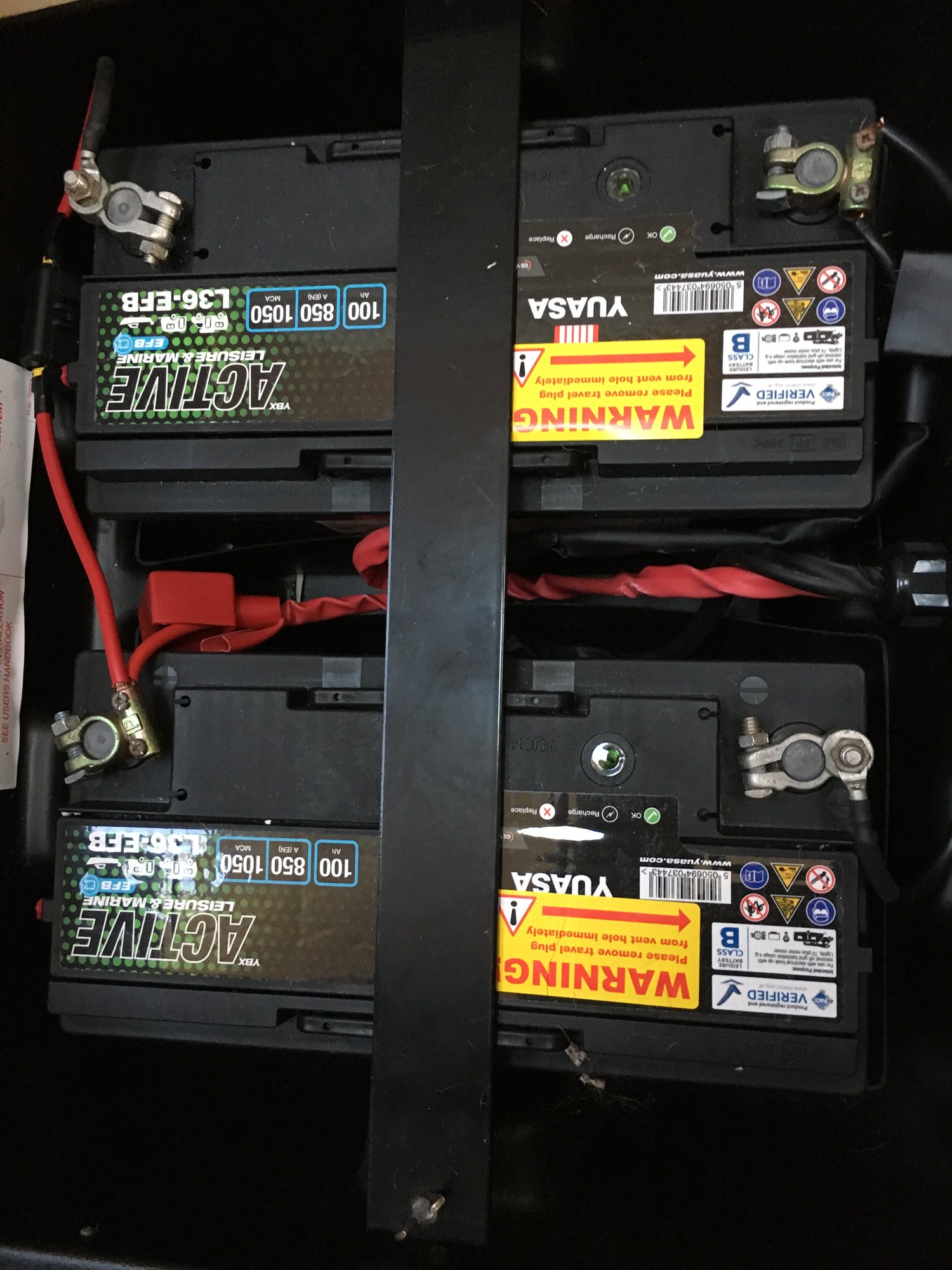 I would like to see the battery wire connections in a better picture,two are about right for the 150w panel, remember very little power in winter and may just be able to hold batts up but no extra for usage.

Not sure about that controller specifically (I'll have to look up the spec sheets), but there are two styles of dual battery solar controllers - and I don't mean MPPT and PWM.

The first type is ok if the idea is to just deal with parasitic losses on the starter battery, such as from an alarm say.
The second type is much more flexible if the goal might be to charge two separate battery banks from a single PV array (as I think one poster has asked about?).

I think it is worth pointing out that the Votronic Duo Digital Dual Battery Solar Controller that is regularly touted as the way to go is one of the first types. For most people who just want a trickle into the Starter Battery, that is fine, but it is limited to just 1A maximum into the secondary battery, no matter how big an array is. Even the 430W Dual Votronic that can put near enough 30A through the controller, only 1A maximum of that 30A will go to the starter - or ANY battery bank connected to the secondary output.

Brian, your existing panel, based on the size you quoted is almost certainly a 150W Panel as you say.
Say you add another pair of 150W panels - that will give you 450W potential of Solar.
The rule of thumb with solar is 1W of Solar per 1Ah of Battery. This would suggest that you will have twice as much solar as you should BUT .... that rule needs to be adapted depending on the individual and the way they use their camper/motorhome. You said you mainly use your motorhome " ... end sept to April" - At the back end of Sept and in April you would be hard pushed to be harvesting anywhere near to the maximum of the Solar array and you won't be overloading with Solar compared to battery. TBH, if anything, I would wonder if there is much value in adding extra solar when your usage is mostly over the winter/cooler time of year as the extra it will give you will be marginal I suspect.
It depends if it suits the way you wild camp, but a portable setup where you can angle the panels might be a more effective option? (I am going to assume you don't really want the option of a roof-mounted tilting setup).

If you were camping April to End-Sept, then 450W of solar into 200Ah of battery would see the batteries likely refilled every day when wild camping - but even then, you could plan your usage to take advantage of that. If you have an Inverter, you could use electric to heat the water in the morning, or use electric kettle or ring for breakfast or lunch, knowing you will be back full again for the evening. In that case, I'd stick on as much solar as I had room for

Hi. This any better Oops finger has a stutter 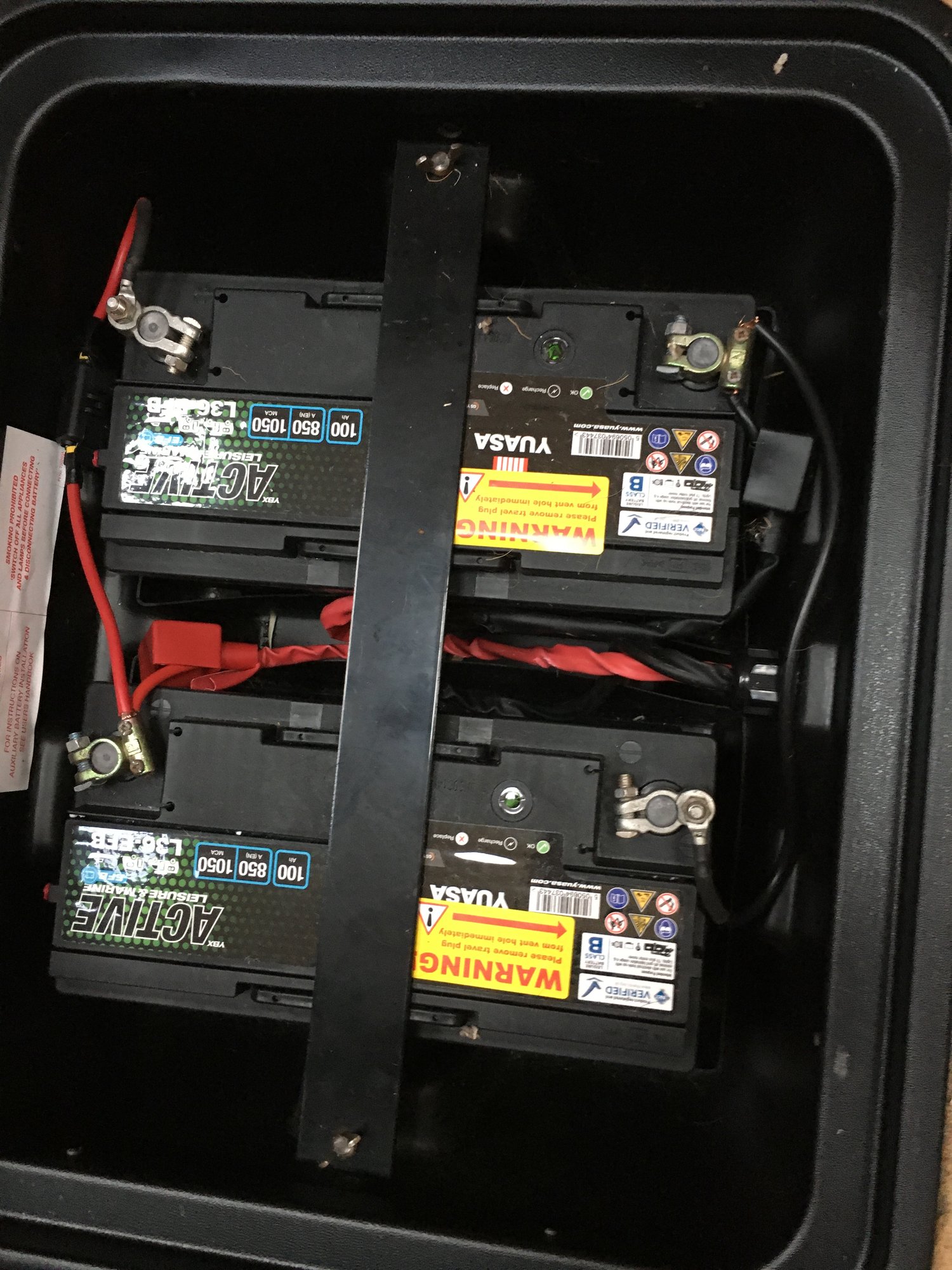