Well we headed from the Ben A’ne carpark to the recently upgraded carpark near kilmahog , bocastle. To find barriers erected. The forestry commission spent a fortune upgrading this car park last year. It’s now larger, flatter and has benches now. But sadly we are not welcome. We are parked on the smaller kilmahog carpark, which is empty apart from us. I am angry and disappointed at this, but hey I should be getting used to this by now. So the poi for Bocastle should now sadly be removed. 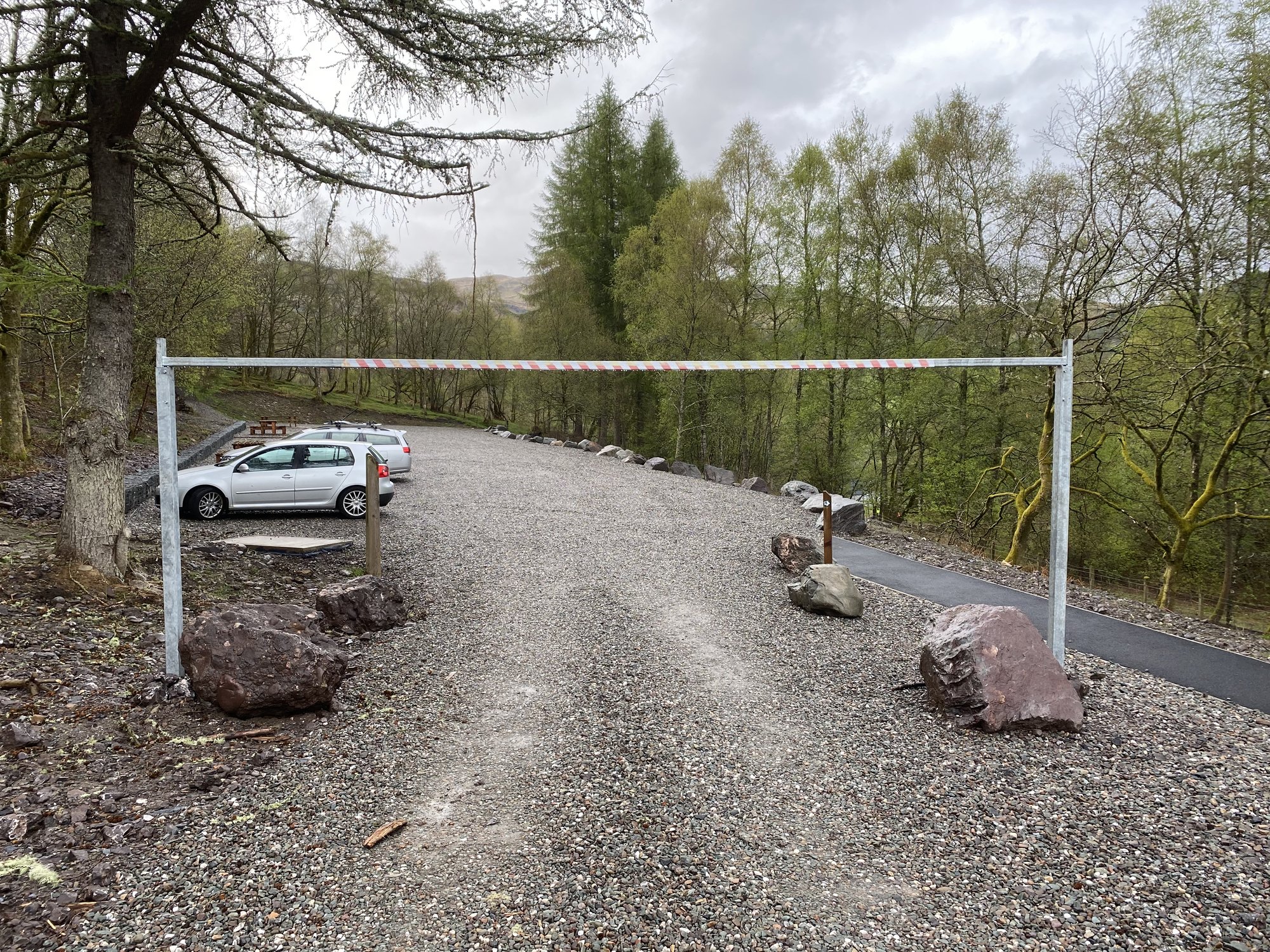 Battery angle grinder, I got locked in once doing a job at a marina outside Enniskillen, little trick i learned and the gate was of the hinges and turfed over the ditch.

For the poi’s it’s known as kilmahog 2 on here.

Fisherman said:
For the poi’s it’s known as kilmahog 2 on here.
Click to expand...

I have reported it using the Location App and referring to this thread.

Not allowing overnighting is bad enough !
Such height barriers which prevent daytime access are a simple infringement of our liberty (Right to Roam ?)
I think they should be illegal and thus the "Irish solution" becomes a legal action to prevent illegal obstruction.
Ok time to get of my high horse (so I can get under the barrier)

I suggest the "French solution" would be for several motorhomes to parkup outside thus blocking it for all !
Preferably with some high profile people trapped inside ??
Last edited: May 11, 2021

jagmanx said:
Not allowing overnighting is bad enough !
Such height barriers which prevent daytime access are a simple infringement of our liberty (Right to Roam ?)
I think they should be illegal and thus the "Irish solution" becomes a legal action to prevent illegal obstruction.
Ok time to get of my high horse (so I can get under the barrier)

I suggest the "French solution" would be for several motorhomes to parkup outside thus blocking it for all !
Preferably with some high profile people trapped inside ??
Click to expand...

Good point blocking for others, be on the front page next day.

Bocastle today, a much improved carpark fir everyone but us to enjoy.
Kilmahog has become a microcosm of what’s happening nationally. Now that the idiots have stopped us from parking at bocastle the other carpark will probably be full of motorhomes. Then guess what they will then use that as an excuse to ban us from there also.
Take a look at this large carpark today and ask why are we not welcome here.
I will be contacting the forestry commission regarding this injustice.

Bocastle carpark tonight. This was always a quiet spot. Never full even when half the size it is now. Not a car in sight, and only two when we passed through earlier today. 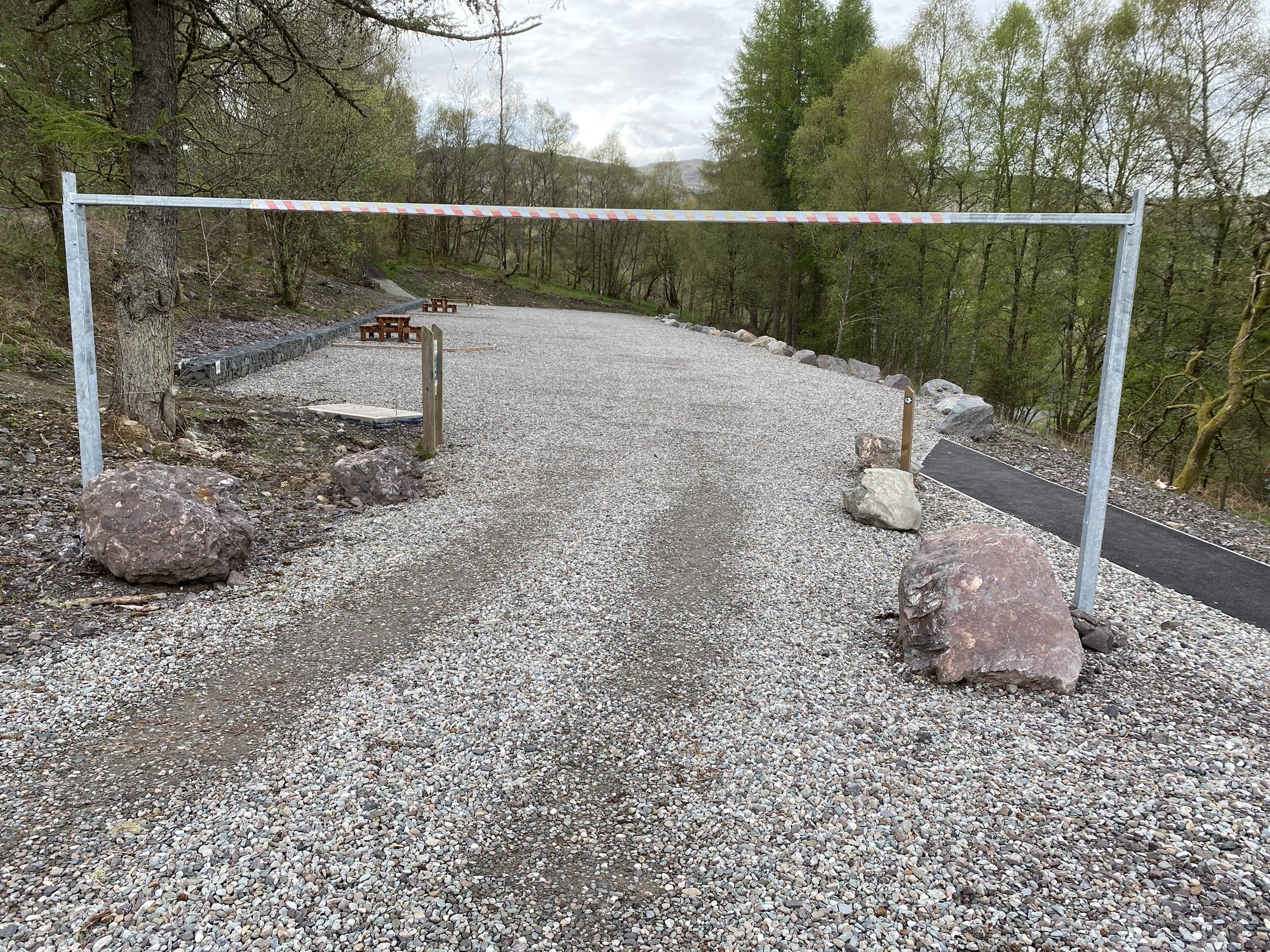 
My wife and I are motorhome owners and for a number of years parked in your Bocastle car park, in Kilmahog, near Callander.

During these years we have enjoyed our time at the carpark, using it as a base to walk to Ben Ledi, one of our favourite Hills.
Last year we arrived and noted that the carpark was being refurbished, so we parked at your carpark across the road named Kilmahog.
We always felt that the Bocastle carpark was in need of refurbishment, and were looking forward to visiting it with our motorhome this year.

We left your Ben A’ne carpark on Monday to head for your Bocastle carpark, but we were astonished to see a much improved car park,
But with height barriers erected preventing us from accessing the carpark.
We had to head over to your Kilmahog carpark instead.

I am mystified why these barriers have been erected, in all our years visiting the carpark we never witnessed any poor behaviour, or rubbish being left.
The carpark was normally empty at night with no one else there, and during the day it was mostly only half full.
The new carpark is much larger, and last night was completely empty at 1900hrs, as you can see from attached photo.

I would like to know why you have seen fit to prevent us from gaining access to the carpark, whilst still allowing access to all other carparks in the area.
This is in contradiction to what you are doing this year welcoming motorhomes in carparks throughout Scotland.

Also barriers still allow small camper vans access, and if your concerns were about inappropriate use, this is most likely to come from campers as they mostly have no facilities.
Although the vast majority in campers would never behave in such a manner.

Just got a reply, I will now contact Loch Lomond and the Trossachs National park.

Thank you for your enquiry.

The leaseholders, for Bocastle Carpark, are Loch Lomond and Trossachs National Park.

Got this reply, and somewhat surprisingly I think there is hope here.
Whats required is as many complaints as possible.
Anyone who can get this onto the CAMpRA site please do so.
Also take a look at the overview on the web address given.
Apparently they are trying to attract people into the area to visit

Thank you for your email of 13th May detailing the difficulties you faced accessing the newly redeveloped car park at Bochastle. This car pack is owned by Forestry and Land Scotland and has been upgraded recently as part of Callander’s Landscape suite of projects (more here:https://www.callanderslandscape.org/). The Park Authority have now taken on the lease and associated management of this site and we are interested to hear your feedback on the ‘goalpost’ infrastructure which was installed as part of the upgrade works. This feature was specifically requested as part of the site requirements at the specification stage, and so was designed into the plans which were developed through the partnership, however it is not a usual feature that we have on any of our other Park Authority owned or managed car parks. A such we are monitoring this position and will take all feedback into account when reviewing whether this will remain over the course of the coming season and we will make a note of your comments and observations as part of this.

Many thanks for your reply.

Gillian I note from the overview pot out by Callander Landscape that this venture is amongst other things to encourage visitors to the area.
Sorry, but I hardly think that erecting barriers preventing people who have been visiting the area regularly for years, is very welcoming.
Also I forgot to mention the Kilmahog carpark across the road from Bocastle.
This is a small carpark, and was not normally used very often by motorhomes who used the Bocastle carpark.
The Kilmahog carpark is used by canoeists, cyclists, and locals who walk their dogs.
If we start using this carpark due to lack of access to Bocastle this could lead to problems.

Well worth a read, to provide access to the National 7 cycle track, the falls of Lenny and Ben Ledi, that’s unless you turn up in a Motorhome

www.callanderslandscape.org
You must log in or register to reply here.