at least Lee won’t get a french letter 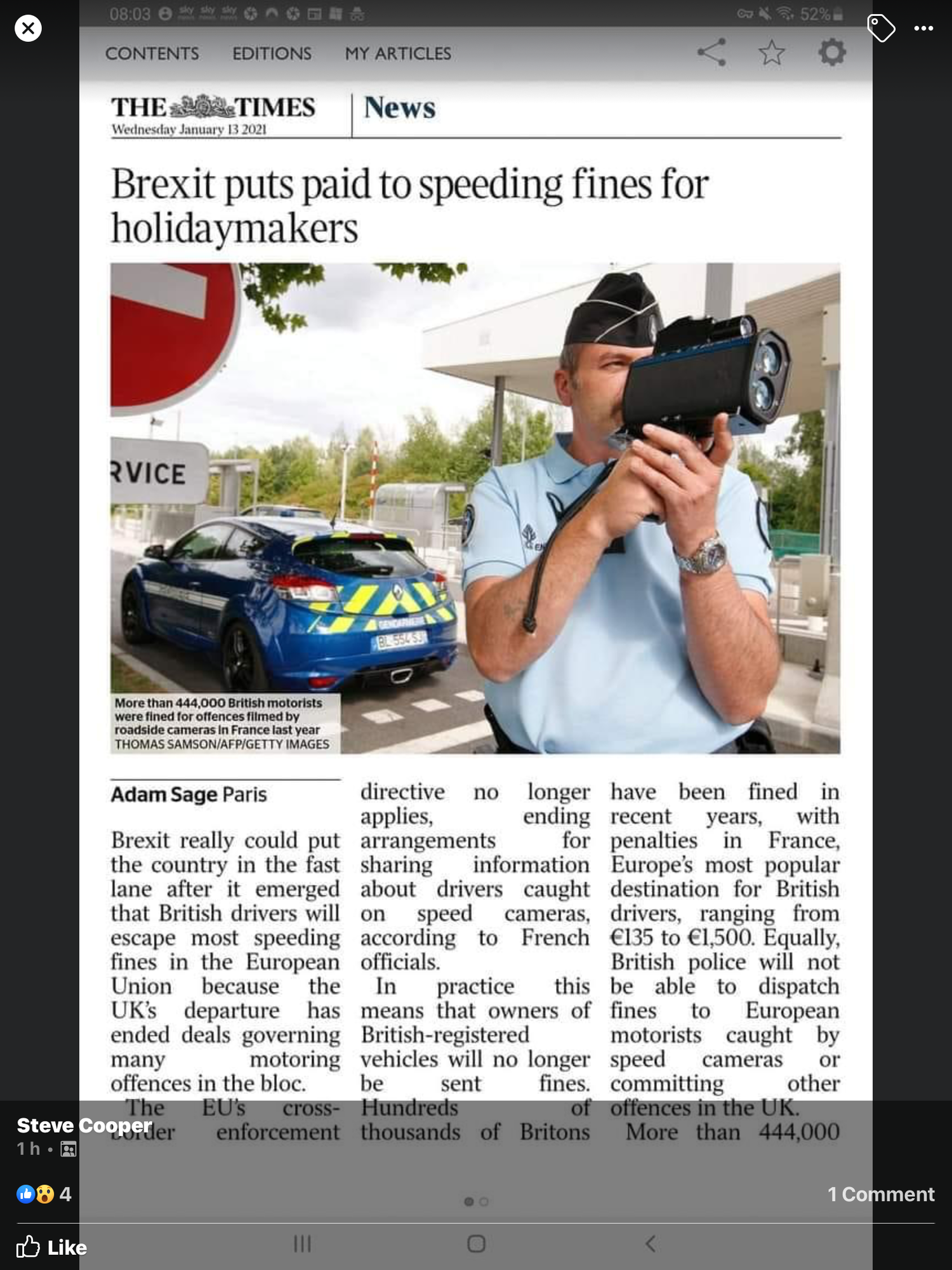 They've had on the spot fines for years. We'll have to wait and see if info from cameras gets passed on to border control fast enough.

Mate got 2 speeding fines through post, and 1 on the spot fine last time he went over to France. I did laugh, mainly cause he is French

I`ve been flashed in France 4 or 5 times over the years but thankfully have never received anything in the post, the last time was 3 years back.

All but 1 of them, just outside Châteaudun i was nowhere near the speed limit but still got flashed.

The Châteaudun one was borderline having thought i hadn`t actually crossed the town boundry where the speed drops, i was already slowing down.

I got one years back in engerland, took no notice of it and never heard a thing, anyway its hard to get blood out of a stone.

Great news, only time will tell if they find another way of raising taxes, I never thought of them as fines.
Now with the new van I will have to watch the limits even more as it's far to easy to speed in it.

Wooie1958 said:
I`ve been flashed in France 4 or 5 times over the years
Click to expand...

Im hoping to get flashed at someday.

often the camera flashes because of the size of veh above 3.5 ton speed limit alters normally don’t follow up if it’s a motorhome unless you are above the car speed lee ?

rugbyken said:
often the camera flashes because of the size of veh above 3.5 ton speed limit alters normally don’t follow up if it’s a motorhome unless you are above the car speed lee ?
Click to expand...

That was my thoughts as well.

Same thoughts too. Motorway cameras must have a height sensor, my last van around 3m tall set cameras off by the dozen. Never got a ticket. Easy enough to slow down to 80 when you see a camera sign.

The Tesla forum has a similar thread running and this post from a Brit living in France somewhat amused me. I hope he doesn’t object to me copying it here.

“These headline grabbing articles, of which there also many in France, have had French drivers choking on their baguettes. After all, high speed dangerous driving is their domain and they certainly don't want upstart British drivers upsetting their ego's. The Gendarmerie have tried to calm them by stating they will return to their pre-unilateral agreement method of dealing with les rosbifs by hauling miscreants off to an ATM or impounding their vehicles. There is also an 'urgent' working party underway by both countries to put back in place the old system.
So, be a little careful when you set off on your Cannonball run

I changed my registration plates recently when I saw Trev's reg displayed on the forum.

I'm not worried about receiving speeding fines any more.

trevskoda said:
Im hoping to get flashed at someday.
Click to expand...

Well hello big boy come on over to jockland and see some true jocks
had to check incase predicta text moved in on jocks phew
Last edited: Jan 13, 2021

The laird said:
Make sure you don't have the euro emblem with GB on them as we may get done as we're not innit now
Click to expand...

I thought about that, a guy i know over the west was told to remove his saltire emblem number plates as they were not legal when he went for an mot a few years ago. I have never used the euro emblem myself on new plates.

Robmac said:
I changed my registration plates recently when I saw Trev's reg displayed on the forum.

I'm not worried about receiving speeding fines any more.
Click to expand...

Dont you talk, I know someone who had that done with there range rover, lucky for them they had proof it was sitting in Charles Hurst garage over a holiday, over £400 of fines if my mem is correct, took a bit of sorting with police involvement, someone had spotted their wagon on the ramp and got plates made and went of to England on a jolly.
You must log in or register to reply here.

Users who viewed this discussion (Total:132)